It is carers week in England this week and in support of this we had a charity bake sale at work. The charities supported were an alzheimer's charity and a carers charity. I know that I should know the names of the charities, but, it has been a bit of a busy week and I forgot to make a note of them. You're here to see the cake anyway, so hopefully you'll forgive me as I did help raise some money with this cake. I am going to tell you about this chocolate and banana cake that I made today and I'll tell you about the Earl Grey Tea cupcakes that I also took to the bake sale another day Underneath this chocolate frosting, is a four layer cake. Two layers chocolate and two layers banana. Both these sponges are based on a traditional english victoria sponge recipe. I wish I had a picture of the inside to show you, but I didn't think it right to cut a slice before taking it to the bake sale, so you'll have to make do with more chocolate roses The recipe for a traditional English victoria sponge has been passed down from mothers to their daughters through many generations and once, you know it you will never need a written recipe to make it again.

For the cakes you need equal quantities of:

You will also need two 8" cake pans, lined with baking paper or sprayed with your favourite non-stick baking spray

Make the banana cake first
Start by weighing three eggs, in their shells. You will probably find that all three weigh between 150 and 200 grams / around 8 ozs

Next weigh out the same weight (as the eggs) of the butter or margarine and sugar. Cream these together in your mixer, with a hand mixer or a wooden spoon if you are feeling strong. You want to cream these together for a good five minutes or so until they look quite pale in colour.

Crack the eggs into a bowl or jug and whisk gently with a fork to break them up a little, then slowly add these to the butter and sugar and beat them in.

Weigh out the same amount of flour and carefully fold this into the mixture. One you have added the flour only mix until it is just incorporated, over mixing can make the cake turn out a bit tough.

If when you are mixing in the eggs, the mixture looks like it is separating, add a couple of spoons of flour with the eggs.

To make this into banana cake, add one banana for each egg, mash the up with a fork first and then just stir them in. Over ripe bananas are best.

Divide the mixture between the two pans and then bake at 180 C / 350 F for about 25 minutes. Check it after 20 minutes and it may need up to 30 minutes. The cake is cooked when it feels springy to the touch.

Next the chocolate cake
Many modern recipes use quite large amounts of chocolate and as a result of this can be quite expensive to make. This is a very traditional and simple to make version that just uses cocoa powder for the chocolate flavour.

Repeat everything as for the banana cake except before weighing out the flour, weigh out 50 grams / 2 ozs of cocoa powder then make this up to the weight of the eggs with the flour. Oh, and don't add the bananas. Bake it just the same too. Start by chopping up the dark chocolate and put it into a large bowl.

Next bring the cream and the golden syrup to the boil in a small saucepan. When boiling remove from heat and (being careful because it is hot) poor into the bowl over the chocolate.

Now leave it there for one whole minute or even a little longer. Use a timer.

The chocolate will now be starting to melt

Using a balloon whisk, starting in the centre of the bowl, make very small circular movements to gradually incorporate the chocolate into the cream. Be patient, it will look like nothing is happening for quite some time, then you will start to see glossy chocolate ganache forming. Now, you can start to make your movements bigger and stir slowly till all incorporated. (Patience really is the key here, not a job for a day you are in a rush)

Finally stir in the cubes of chocolate and the vanilla extract.

At this stage you will have a runny chocolate mixture. If you want a smooth look, just pour this over the cake. (Put the cake on a cooling rack with a tray underneath). If you want to pipe the icing, leave it to firm up. In the UK an hour or two at room temperature is usually about right, if you live in a warmer climate, you may want to put it in the fridge for a while. Keep checking it. You want it firm enough to hold its shape without being too firm to pipe.

Now to layer them up
When the baked cakes are cool layer them up with either a little of the chocolate fudge icing or I decided to use some Dulche De Leche (caramel) from a jar.I piped the roses onto the cake using a Wilton 1M nozzle, a arge star shaped nozzle.When piping the roses, I imagine I am piping each one onto a cupcake. Start with the one in the centre and just work your way out. Slap some more icing on to the sides and smooth. You would not believe how chocolatey this cake smells! Job done. 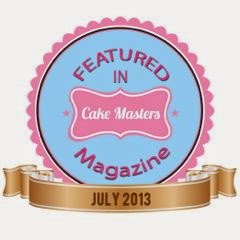 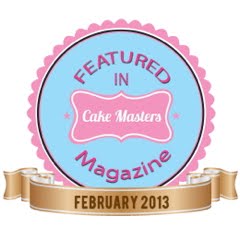